Welcome to The Tilden House 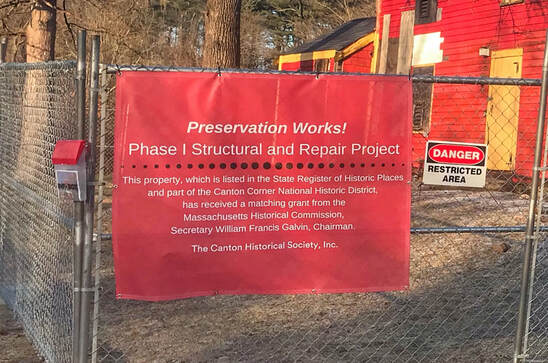 Welcome to the Tilden House, a place where time and history has passed for almost 300 years. Built fifty years before the American Revolution, this homestead has survived so that we can learn about another time and place in our history.

Located in Canton's only National Historic District, the Tilden House is the oldest contributing building, and one of the first surviving houses built in what is now Canton. Preservation efforts are underway to protect and preserve this unique American home. The Tilden House is owned by the town of Canton and leased to the Canton Historical Society. The entire site is managed under the protection of the Canton Conservation Commission. The Canton Historical Society are a partner with the Town of Canton and have successfully secured Phase One funding through the Canton Community Preservation Act. In January 2015, the Canton Community Preservation Committee voted to recommend $414,150 for major portions of Phase One preservation of the Tilden House. On May 18th the Annual Town Meeting unanimously voted in favor to appropriate the funds to move forward with the major preservation effort. In the Spring of 2017,  the Annual Town Meeting authorized the town to find a non-profit organization willing to undertake a lease and perform the work and stewardship over the building. The Canton Historical Society has moved forward, and has undertaken this major preservation project. In tandem, the Society authored a grant request to the Massachusetts Historical Commission and has been awarded $50,000 in matching funds for this project. An award announcement was made in June 2018. The Massachusetts Legislature has provided an additional $100,000 for the project.  It is an exciting time for this almost three-century old home.

Phase II is underway and will focus on the interior of the historic home, including utilities, windows, flooring and finishes. Phase II also includes historical interpretation and measures to make the building ADA compliant. The scope and budget for the second round of work at this property were developed in collaboration with the project’s consulting architects and general contractor.

Preservation work has begun, with major preservation carpentry completed in late 2019. After an extensive bidding process, the work was done by Gerry O'Doherty, an acclaimed preservation carpenter with a specialty in first-period buildings. Learn more about the project, and join the Friends of the Little Red House, Inc. to be a part of this lasting legacy project. ​

​In today’s era of progress and over development in the greater Boston area it is even more important to honor and preserve the architectural gems that still stand from the Colonial era. When I ask any visitor to Massachusetts what they like best, the answer is almost always “the palpable sense of history that is everywhere.”  History cannot be fully appreciated or understood from first person narratives and text books alone. Preserving a home built in 1725 allows visitors to see and touch was life was actually like in the time period, the palpable sense of history.  Now is the time to restore the David Tilden House to its former glory and create a destination for all Massachusetts residents to enjoy and get a view into our past.  - Dan Davey, Canton Resident