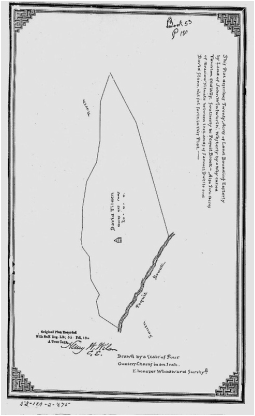 A copy of David Tilden's Plat in Dorchester
In the wilds of Dorchester this area was covered with a majestic ancient forest. It was a land where wolves, foxes and bears held dominion and control. Throughout the Great Blue Hills native peoples gathered to hunt and fish and send signals through the region. In 1637 this area known as Dorchester was one of the largest towns in New England. What would later become Milton (1662), Wrentham (1724), The South Precinct comprising the towns of present day Stoughton, Sharon, and Canton (1726) is the land where David Tilden settled.

One of the first English settlers of this area was David Tilden born in Scituate, Plymouth Co.,MA, David was one of twelve children born to Stephen Tilden and Hannah Little. David's grandfather was Nathaniel Tilden who arrived at Plymouth Plantation in February 1634 aboard the Hercules. In the book,"History of Marshfield", by Lysander Richards, it states:" Elder Nathaniel Tilden was the ancestor of nearly all the Tildens in Marshfield, Massachusetts. He was one of three brothers, who were called the "Men of Kent", from England. He came to Scituate, Massachusetts in 1628 and purchased that portion called "Two Mile" tract, now known as North Marshfield, Massachusetts. His farm extended both sides of the North River, part of it being on "Gravelly Beach"."

By the time David and Abigail had arrived in Dorchester Village, now present day Canton Corner, they found a small village at the intersection of Pleasant and Washington Streets. In 1654 this area had been established as the Ponkapoag Plantation, 6000 acres of land set aside for the Ponkapoag Indians. And it was from the native people that David received his deed of land. The deed signed by Amos Ahauton, Thomas Ahauton, Simon George, Hezekiah Squamaog and George Hunter, gave land ownership of 20 acres to David Tilden, Husbandman, "outdone of the English Tenants of Lessees..." for 5 pounds 15 shillings, "a certain messuage or Tenement with lands thereto belonging".

A small building was already on the site where David Tilden planned to build his new home. Jabez Searle, who had received a grant from his father Robert in 1710 and lived on the property until at least 1723 had apparently built a small building which most likely is the rear portion of the present day Tilden House.

So in 1725 David and Abigail began the move to their new property in Dorchester. David and Abigail had been busy during their first fifteen years of marriage and had six children; David Tilden Jr. b.1711, Abigail Tilden b.1713, Hannah Tilden b.1715, Elijah Tilden b. 1719, Mary Tilden b.1722, Ezra Tilden b.1724. It was apparent that by the size of the family that a large house was called for. The original portion of the house built by David consists of the two east rooms in the two story front portion of the house along with the lean-to built by Jabez Searle. Two more children were added to the family born in Stoughton: Stephen 1727, and Nathaniel 1730.

David was interested in church matters and swept the meeting-house. There are reports of difficulties with neighbors, and was once charged with being "unduly transported" with the cup that inebriates. David died July 3, 1756 in Stoughton, Norfolk Co.,MA, at 71 years of age. David's grave is in the Canton Corner Cemetery and the stone is inscribed "In memory of Mr. David Tilden, who died July ye 3d 1756, in ye 71st year of his age." Upon David's death the family homestead was occupied by David Tilden Jr. Abigail died on the 25th of June 1758 in Stoughton, at 71 years of age. Abigail is buried in Canton Corner Cemetery.